Since the mass production of lithium battery, it has rapidly led the trend in the field of battery with its excellent performance such as high energy ratio, long cycle life and high electrode voltage. It has an absolute advantage in mobile phone, computer and other industries, and has become one of the important research topics of new energy vehicles. In order to meet the requirements of the market for high storage energy, enterprises increase the specific energy research and development of a single battery. Although it can improve the standby time of mobile phones, it also makes the volume energy density of a single battery higher and higher, and its security problems become more and more prominent. The main restrictive factor for the commercial promotion of high-capacity and lithium-ion batteries is safety, and there are many potential safety hazards. In order to analyze and solve such problems, several international safety standards have been proposed, such as IEC62133, UL1642, IEEE1625, etc; The recommended standard GB / T18287-2000 has also been introduced in China. At the same time, in order to ensure the safety of lithium batteries in aviation, long-distance transportation and equipment use, standard UN38.3, GB4943 and so on have been introduced. However, in recent years, with the large-scale utilization of the market and the increase of the battery’s own capacity, the probability of serious problems such as fire and explosion of lithium batteries under abuse conditions (such as heating overcharge and over-discharge, short circuit, vibration, extrusion, etc.) has greatly increased. The resulting explosion injuries or recall products due to safety hazards often cause fatal effects on enterprises Various companies are investing in the development of new lithium battery safety prevention technologies, while simulating possible problems to carry out more matching detection methods, such as Japan’s JISC8714 mandatory internal short-circuit test IEC upper and lower limit temperature test means acupuncture test. In order to meet the market demand, the existing safety standards have also been upgraded in China, and revised to GB/T18287-2013, GB31241-2014; This article briefly explores some of the current detection methods.

The needling test is a forced internal short circuit. Under the ambient temperature of 20 ℃ ± 5 ℃, the battery is fully charged with standard charging current, a thermocouple is pasted near the center of the battery and placed in the fume hood, and a 3mm diameter stainless steel needle is used to quickly pierce the battery at the speed of 20mm / s. The needle needs to fully penetrate to the other side of the battery, and then the steel needle remains stationary for 1 minute. Observe whether the battery has fire and explosion, and detect the battery temperature change data at the same time. The passing standard of the experiment is that the battery does not fire and does not explode. Because this kind of test is not easy to pass, there is a dispute about the scenario simulation problem, and the test is not listed in the national standard GB / T18287. QC / T743-2006 has a needle test: use a ø 3mm ~ ø 8mm high temperature resistant steel needle to penetrate from the direction perpendicular to the battery plate (the steel needle stays in the battery). The battery shall not explode or catch fire .

Nail penetration test simulates the safety problem after foreign objects, especially metal sharp substances stab the battery surface. At this time, the battery isolation film is pierced, and the positive and negative electrodes in the battery are short circuited instantaneously. The short-circuit current can produce a lot of heat instantaneously. Acupuncture causes the battery to short circuit at the acupuncture point. The steel needle itself becomes the short circuit point and generates a large amount of heat to form a local overheating area along the battery around the steel needle. Set the DC resistance of the battery as R, the short-circuit resistance of the short-circuit area as r, the battery voltage as U, and the heat generation power in the circuit area Q: Q = U²r / (R + r)². When the temperature in the local overheating zone exceeds the critical point, it will lead to heating out of control. At present, the most commonly used electrolyte for industrial lithium-ion batteries is the mixed solvent of LiPF6 and alkyl carbonate (including ECPC, decemc, etc.). The flash points of these common solvents are as follows: 160 ℃ (EC) 132 ℃ (PC) 31 ℃ (DEC) 31C (DMC). At the same time, the electrolyte will also send out decomposition reaction. The decomposition reaction takes place between 170 ℃ and 330 ℃, and the heat release is about 460 J / g, which is related to lithium salt and solvent. It is found in the experiment that the temperature of the general battery rises sharply after the needle is short circuited, and can reach about 120 ℃ in a few seconds. Because the alkyl carbonate is very easy to burn, when the shell of the lithium-ion battery is pierced, the solvent leaks and contacts the oxygen in the air, it is possible to ignite the organic solvent in the overheated area near the steel needle, which will cause the battery to ignite or detonate the battery internally. 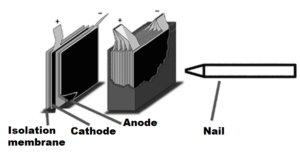 Lithium batteries are made up of multiple positive and negative electrodes connected in parallel, as shown in Figure 1. The tip of the nail first slowly pierces the positive and negative isolation membrane of the first layer, at this time, the discharge current of the first layer of parallel electrode pieces is very large, and the remaining electrode pieces without short circuit are discharged and heated through the first short circuit point; Continue to penetrate into the second electrode fragment isolation membrane, and the remaining electrodes that have not yet been shorted are slightly reduced by the discharge current at the current two short circuit points; Continuing to pierce, the short-circuit current continues to drop sequentially until it completely penetrates the isolation membrane of the battery parallel electrode piece. At this time, the short circuit point occurs between all the electrodes, and the short circuit continues to occur with minimal short circuit current. If the needle pricking speed is faster, such as 40mm/s, the short-circuit current can basically be considered that all the electrode pieces are heated under the same short-circuit current; If the speed is slow, such as 0.1mm/s, when it pierces into the pre-electrode, the discharge current is large, the instantaneous heat is more, and the high temperature is generated, which can stimulate the decomposition reaction of the electrolyte, causing the battery to burn on fire. If the needle tip has just punctured the surface of the battery during the experiment and stopped, the short-circuit current is extremely large at this time, and the possibility of fire is very large. In order to ensure the repeatability and reproducibility of the test, it is necessary to accurately specify the equipment used, determine the diameter, hardness, surface finish, length and taper of the needle tip, determine the number of times the needle is reused and the disposal conditions; Guarantee to penetrate the battery at the same speed at every time. The penetration depth of the battery also requires a uniform specification.