Since the mass production of lithium batteries, it has quickly led the trend in the battery field with its high energy ratio, long cycle life, and high electrode voltage. It has an absolute advantage in mobile phones, computers and other industries. And become one of the important research topics of the current new energy vehicles.

In order to meet the market demand for high storage energy, enterprises have increased the specific energy research and development of individual batteries. Although it is possible to increase the waiting time of the mobile phone, it also makes the volumetric energy density of a single battery higher and higher. The safety of lithium batteries is becoming more and more prominent. The main constraint to the commercialization of high-capacity and lithium-ion batteries is safety.

However, in recent years, with the large-scale utilization of the market and the increase in the capacity of the battery itself, under the abuse conditions (such as heating, overcharging, overdischarge, short circuit, vibration, extrusion, etc.), lithium batteries have serious problems such as fire and explosion. This can cause fatal effects on companies caused by explosions or recalls of products due to safety hazards. Various companies are investing in the development of new lithium battery safety prevention technologies. In addition, it also simulates possible problems and develops a more compatible detection method.

In order to analyze and solve such problems, the international proposed multiple security standards, such as IEC 62133, UL1642, IEEE 1625 and so on. China has also introduced the recommended standard GB/T 18287-2000. At the same time, some standards such as: UN 38.3, GB 4943 provide guarantee for the safety of lithium batteries in aviation and long-distance transportation and equipment use. This article makes some simple discussions on the current IEC 62133 partial detection methods.

Mechanical shock is primarily used to simulate an environment in which the product is subjected to impact during use, handling, or transportation. In order to determine the adaptability of the product to various impact forces, and to assess the integrity of its structure. The commonly used battery testing equipment is battery crush test chamber. 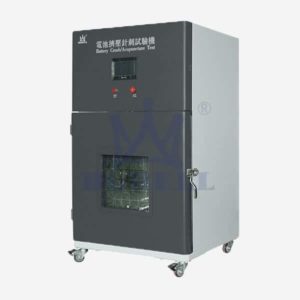 The drop test is primarily used to simulate the free fall that a product may experience during handling. Mainly to examine the ability of the product to resist accidental impact. 80% of electronics damage is due to drop and collision. R&D personnel often spend a lot of time and cost, and do related quality tests for products. The most common structural tests are drop and impact tests. In fact, the company most commonly use the battery testing equipment include battery drop tester and heavy impact tester 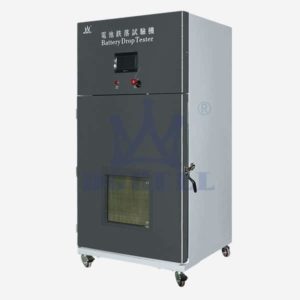 The IEC 62133 standard requires free fall at an ambient temperature of 20 °C ± 5 °C, and each battery is fully charged. Each fully charged battery or cell needs to fall 10M down to the concrete floor. And repeat 3 times. The battery or cell should have an impact force in a random direction when it falls. After the test, the battery or cell should be placed for 1 hour. Then visually check. The battery has no fire or explosion. The drop test examines the possible drop in the transportation environment or customer use. From a safety point of view, it is to test the solder sealing performance of the battery.

IEC 62133 requires that each cell be fully charged and placed in a chamber with gravity or circulating air convection. The temperature of the chamber was raised to 130 °C ± 2 °C at a rate of 5 ° C / min ± 2 ° C / min. The battery needs to be placed in this environment for 10 minutes (30 minutes for large cells). During the test, the battery does not ignite and does not explode.

When the battery system is abnormal, the temperature rises. IIn order to prevent danger, thermoplastic insulation melts (120℃ ~ 140℃). In addition, the membrane pores close and become insulators. This prevents the electrolyte from passing through.So as to achieve the purpose of cutting off the current. Thereby achieving the purpose of interrupting the current.

Because of the high temperature condition, the internal separator of the battery will thermally shrunk too much. And This will cause a short circuit between the inner positive and negative electrode sheets. The battery continues to act under the external heat source hot box, while the internal battery generates short-circuit current heat Q. The two types of heat cause the battery separator to continue to shrink, causing more internal short circuits, and the internal heat of the battery rises exponentially during a vicious cycle. Because of the chamber constant temperature for 10 minutes of 30 minutes, the battery cannot dissipate heat. As a result, heat builds up quickly. Eventually the battery is out of control.

As the user’s requirements for the energy density of lithium-ion batteries continue to increase, the safety performance of lithium batteries is facing increasing challenges. Many companies have studied many security measures to improve the safety of batteries. Conducting extreme testing helps companies find deficiencies in their products and produce safer products.

Last but no least , excellent battery testing equipment will play a good catalytic role for enterprises. We are a manufacturer of battery test equipment and environmental test equipment with 13 years of production and design experience. We believe that our products can help companies prevent battery fires, explosions and other extreme conditions, and produce safer products. It can also promote the stable development of lithium batteries and their derivatives.

6 thoughts on “The Importance of Lithium Ion Battery Safety Testing”